Centralizing Democrats and their monopolistic, Big Media oligarch partners seek to censor the Internet for ideology and profit

When Senators give speeches, they will say that you can't put a price on freedom. But as it turns out you can. You can actually put an exact dollar amount on the Constitution. And that amount is $335,906.

That's the amount that Hollywood gave Senator Patrick Leahy. And in return, Leahy gave them COICA. That's not the same of some new disease, it's the abbreviation for Combating Online Infringement and Counterfeits Act, the biggest and more comprehensive internet censorship proposal in the history of this country. It would give Attorney General Eric Holder the power to create a blacklist of websites and force all companies that do business in the United States to comply with that blacklist.

Ever since the Clinton Administration's Communications Decency Act, Democrats have been obsessed with censoring the internet. And that drive has kicked into high gear again. COICA is the most ambitious plan to enact government control over freedom of expression on the internet since the days of the CDA.

While this bill was crafted on behalf of the entertainment industry, the applications go far beyond that. Websites that feature collections of articles, such as FreeRepublic or DemocraticUnderground could easily be targeted under the terms of COICA. And so could many blogs, which list entire articles or cite extensively from them. Any site or blog that embeds videos or images which are not authorized by the copyright holder could be similarly targeted. And with the Attorney General of a highly politicized administration wielding the power to preemptively shutter and blacklist entire websites, it would be all too easy for COICA to be used as a club for suppressing dissent...

COICA is a unconstitutional bailout of our freedoms and internet civil rights for a specific industry that has troubling implications for everyone. And it's a demonstration of just how dangerous the intersection of corporate lobbyists and politicians can be. Some conservatives believe that supporting capitalism means blindly endorsing any corporate action. It does not. When corporations subvert public representation and harness government force for their own benefit, then they act like a part of the government.

Leahy is a perfect example, a Senator from Vermont, not exactly a major hub of the entertainment industry, with deep ties on the other coast. Leahy's ties to big Hollywood studios like Time Warner go so ridiculously deep that he actually got a part in the last Batman movie and had the movie premiere at his own fundraising event back in Vermont. Carrying water for Hollywood has nothing to do with the needs of Vermont's citizens. But this is what happens when corporations can buy themselves their own senators.

Leahy picked up that infamous 335,906 from TV and movie industry donors and PAC's. He was the third largest recipient of entertainment industry money in the Senate. The top recipient, Senator Schumer is a COICA cosponsor. So is the 5th top recipient, Senator Gillibrand, Schumer's own trojan horse. And there's plenty of overlap between top donors and cosponsors on the rest of this list. This isn't unusual. This is how Washington D.C. does business all the time. And that's the scary part.

This isn't just about the entertainment industry. It's about how the intersection of money and power, routed through a centralized federal government can and does lead to tyranny. When politicians are given a legislative framework that allows them to exercise virtually unlimited powers, without regard to the United States Constitution or individual freedoms or the public will, and then allowed to put that power at the service of their biggest donors, the end result is not democracy, but oligarchy. And COICA is another product of that oligarchy...MORE...LINK
------------------------ 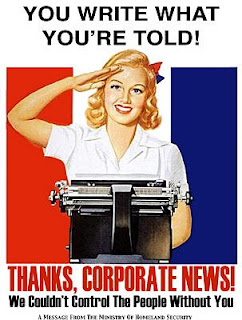