The time has come for both the Left and Right to hold these perjuring, defilers of the U.S. Constitution accountable: Impeach Obama

From:
Impeach Barack Obama
A Challenge to Tea Partiers and Antiwar Liberals

The time has come for those who claim high regard for the U.S. Constitution to show that they mean what they say. The time has come to begin impeachment proceedings against President Barack H. Obama for high crimes and misdemeanors.

The United States has initiated a war against Libya, as Secretary of Defense Robert Gates has conceded. When one country bombs another, which has not attacked it nor posed any immediate threat to it, that is an act of war. No "humanitarian" rationale justifies such an act. Only an act of Congress suffices according to the United States Constitution. Barack Obama has violated that provision of the United States Constitution, which he swore, falsely it is now apparent, to defend and protect. Barack Obama has committed this greatest of impeachable offenses. Other offenses related to torture and violation of the civil liberties of U. S. citizens may emerge as articles of impeachment are drawn up.

Many Tea Party candidates and paleo-conservative and libertarian Republicans, such as Rep. Ron Paul, won office by declaring their high regard for the Constitution. Rep. Paul stated in advance of the attack on Libya that a Congressional declaration of war was necessary according to the provisions of the Constitution before an assault could proceed. If these Republicans do not act now to begin impeachment following the lead of the very principled Dr. Paul, their words meant nothing, and they should be turned out of office.

Similarly antiwar liberals such as Dennis Kucinich backed candidate Barack Obama because of his promises of peace. But President Obama has given us ever more war. His pledge to end the war in Iraq by 2009 turns out to be an empty promise, and he has widened the war in Afghanistan. He has also ordered the bombing of Pakistan, another act of war not authorized by Congress. If such liberals are genuine agents of peace, they too have an obligation to follow the lead of Kucinich who has used the term impeachment with respect to Barack Obama’s behavior to initiate impeachment proceedings. Otherwise they are poseurs, and they should be turned out of office.

Barack Obama can himself be called as the first witness to the hearings on his impeachment, so obvious is his crime. In 2008 as a candidate for the presidency he replied as follows to a question from the Boston Globe’s Charlie Savage.

Savage:" In what circumstances, if any, would the president have constitutional authority to bomb Iran without seeking a use-of-force authorization from Congress? (Specifically, what about the strategic bombing of suspected nuclear sites — a situation that does not involve stopping an IMMINENT threat?)

Obama: "The President does not have power under the Constitution to unilaterally authorize a military attack in a situation that does not involve stopping an actual or imminent threat to the nation."

High members of his administration agree and might provide ancillary testimony. Vice President Joseph Biden has declared: "The Constitution is clear: except in response to an attack or the imminent threat of attack, only Congress may authorize war and the use of force." Secretary of State Hillary Clinton was of the same opinion: "If the country is under truly imminent threat of attack, of course the President must take appropriate action to defend us. At the same time, the Constitution requires Congress to authorize war. I do not believe that the President can take military action – including any kind of strategic bombing – against Iran without congressional authorization."...MORE...LINK 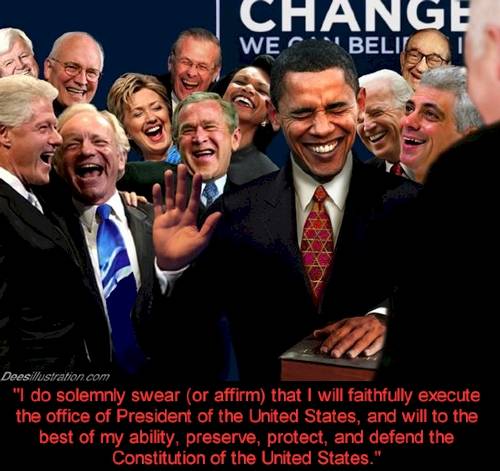