How Senator Rand Paul out-witted neo-totalitarians Levin and McCain, and snared them in their own Zio-fascist tricks

...Yesterday, in a move that put egg on the face of every supporter of the military detainee amendment of the National Defense Authorization Act, Paul forced a recorded vote on the issue.

According to The Hill, what happened was this: an amendment that would have clearly given the military the right to detainee enemy combatants even after being acquitted of crimes could "still be held in military detention until they are no longer deemed a threat." So, basically, what this amendment would have done is kill basic human civil rights, for anyone the president, the Congress, or the military decided was a threat, even if they were cleared in a legal court of law. How screwed up is that? That sounds more like something the former Soviet Union would do, not the United States of America. At least, not the United States of America many people grew up in.

Prior to the vote, Sen. Jeff Sessions (R-AL) called it to the floor and explained the meat of it and why all senators should support it. Then, in a dick-move by Michigan's Carl Levin (the Armed Services Committee Chairman) and failed presidential candidate John McCain attempted to sneak this thing through using a voice vote. A voice vote is an unrecorded vote, so no one outside of the Senate would know who voted in which way.

Paul, however, decided to force a recorded vote on the measure, which effectively killed the amendment. After all, who wants their constituents to know that they supported one of the most intrusive and un-American bills ever put before them? Even Levin himself told the members of the Chamber that he had "great problems" with it, but was going to vote in favor of it anyway. So, when Sen. Paul spoke up and said, "I am going to ask for the yays and nays," no doubt, his assertion surprised and humbled many who had even considered voting in favor of it.

In the end, the amendment was voted down 41-59. Unfortunately, NDAA bill itself was passed, with only seven senators (including Paul) voting against it. The current wording of the NDAA bill that passed the Senate states that it won't usurp authority from current law, but the wording is such that it could. The president has vowed to veto it, which would certainly be a good thing.

The NDAA is so bad and so dangerous to American freedom that those who would be charged with obeying this potential law don't even want it—the FBI, the executive branch, the CIA, and the military; no one wanted this law. It was created by some power hungry war mongers who have no idea what they're doing or how to fight terrorism...MORE...LINK
------------------------- 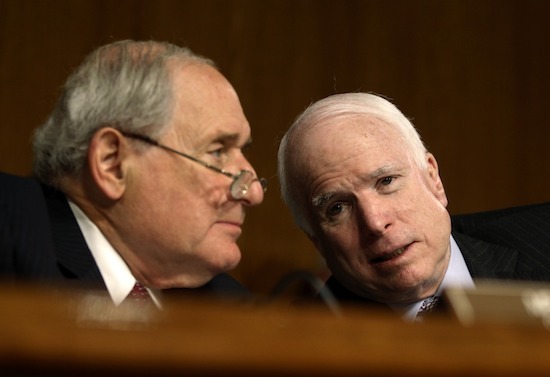 Up to no good: Sick, scheming Zionists Levin and McCain's efforts to sneak through a Soviet-like detention policy on voice-vote was flouted by heroic Rand Paul (below)