The last three weeks I have traveled about, taking the pulse of the more forgotten areas of central California. I wanted to witness, even if superficially, what is happening to a state that has the highest sales and income taxes, the most lavish entitlements, the near-worst public schools (based on federal test scores), and the largest number of illegal aliens in the nation, along with an overregulated private sector, a stagnant and shrinking manufacturing base, and an elite environmental ethos that restricts commerce and productivity without curbing consumption.

During this unscientific experiment, three times a week I rode a bike on a 20-mile trip over various rural roads in southwestern Fresno County. I also drove my car over to the coast to work, on various routes through towns like San Joaquin, Mendota, and Firebaugh. And near my home I have been driving, shopping, and touring by intent the rather segregated and impoverished areas of Caruthers, Fowler, Laton, Orange Cove, Parlier, and Selma. My own farmhouse is now in an area of abject poverty and almost no ethnic diversity; the closest elementary school (my alma mater, two miles away) is 94 percent Hispanic and 1 percent white, and well below federal testing norms in math and English.

Here are some general observations about what I saw (other than that the rural roads of California are fast turning into rubble, poorly maintained and reverting to what I remember seeing long ago in the rural South). First, remember that these areas are the ground zero, so to speak, of 20 years of illegal immigration. There has been a general depression in farming — to such an extent that the 20- to-100-acre tree and vine farmer, the erstwhile backbone of the old rural California, for all practical purposes has ceased to exist.

On the western side of the Central Valley, the effects of arbitrary cutoffs in federal irrigation water have idled tens of thousands of acres of prime agricultural land, leaving thousands unemployed. Manufacturing plants in the towns in these areas — which used to make harvesters, hydraulic lifts, trailers, food-processing equipment — have largely shut down; their production has been shipped off overseas or south of the border. Agriculture itself — from almonds to raisins — has increasingly become corporatized and mechanized, cutting by half the number of farm workers needed. So unemployment runs somewhere between 15 and 20 percent.

Many of the rural trailer-house compounds I saw appear to the naked eye no different from what I have seen in the Third World. There is a Caribbean look to the junked cars, electric wires crisscrossing between various outbuildings, plastic tarps substituting for replacement shingles, lean-tos cobbled together as auxiliary housing, pit bulls unleashed, and geese, goats, and chickens roaming around the yards. The public hears about all sorts of tough California regulations that stymie business — rigid zoning laws, strict building codes, constant inspections — but apparently none of that applies out here.

It is almost as if the more California regulates, the more it does not regulate. Its public employees prefer to go after misdemeanors in the upscale areas to justify our expensive oversight industry, while ignoring the felonies in the downtrodden areas, which are becoming feral and beyond the ability of any inspector to do anything but feel irrelevant. But in the regulators’ defense, where would one get the money to redo an ad hoc trailer park with a spider web of illegal bare wires?...

California coastal elites may worry about the oxygen content of water available to a three-inch smelt in the Sacramento–San Joaquin River Delta, but they seem to have no interest in the epidemic dumping of trash, furniture, and often toxic substances throughout California’s rural hinterland. Yesterday, for example, I rode my bike by a stopped van just as the occupants tossed seven plastic bags of raw refuse onto the side of the road. I rode up near their bumper and said in my broken Spanish not to throw garbage onto the public road. But there were three of them, and one of me. So I was lucky to be sworn at only. I note in passing that I would not drive into Mexico and, as a guest, dare to pull over and throw seven bags of trash into the environment of my host.

In fact, trash piles are commonplace out here — composed of everything from half-empty paint cans and children’s plastic toys to diapers and moldy food. I have never seen a rural sheriff cite a litterer, or witnessed state EPA workers cleaning up these unauthorized wastelands. So I would suggest to Bay Area scientists that the environment is taking a much harder beating down here in central California than it is in the Delta. Perhaps before we cut off more irrigation water to the west side of the valley, we might invest some green dollars into cleaning up the unsightly and sometimes dangerous garbage that now litters the outskirts of our rural communities.

We hear about the tough small-business regulations that have driven residents out of the state, at the rate of 2,000 to 3,000 a week. But from my unscientific observations these past weeks, it seems rather easy to open a small business in California without any oversight at all, or at least what I might call a “counter business.” I counted eleven mobile hot-kitchen trucks that simply park by the side of the road, spread about some plastic chairs, pull down a tarp canopy, and, presto, become mini-restaurants. There are no “facilities” such as toilets or washrooms. But I do frequently see lard trails on the isolated roads I bike on, where trucks apparently have simply opened their draining tanks and sped on, leaving a slick of cooking fats and oils. Crows and ground squirrels love them; they can be seen from a distance mysteriously occupied in the middle of the road.

At crossroads, peddlers in a counter-California economy sell almost anything. Here is what I noticed at an intersection on the west side last week: shovels, rakes, hoes, gas pumps, lawnmowers, edgers, blowers, jackets, gloves, and caps. The merchandise was all new. I doubt whether in high-tax California sales taxes or income taxes were paid on any of these stop-and-go transactions.

In two supermarkets 50 miles apart, I was the only one in line who did not pay with a social-service plastic card (gone are the days when “food stamps” were embarrassing bulky coupons). But I did not see any relationship between the use of the card and poverty as we once knew it: The electrical appurtenances owned by the user and the car into which the groceries were loaded were indistinguishable from those of the upper middle class...

Do diversity concerns, as in lack of diversity, work both ways? Over a hundred-mile stretch, when I stopped in San Joaquin for a bottled water, or drove through Orange Cove, or got gas in Parlier, or went to a corner market in southwestern Selma, my home town, I was the only non-Hispanic — there were no Asians, no blacks, no other whites. We may speak of the richness of “diversity,” but those who cherish that ideal simply have no idea that there are now countless inland communities that have become near-apartheid societies, where Spanish is the first language, the schools are not at all diverse, and the federal and state governments are either the main employers or at least the chief sources of income — whether through emergency rooms, rural health clinics, public schools, or social-service offices. An observer from Mars might conclude that our elites and masses have given up on the ideal of integration and assimilation, perhaps in the wake of the arrival of 11 to 15 million illegal aliens...MORE...LINK
-------------------------

The money-grubbing, imperious neocon author of this piece, Victor Davis Hanson, might want to have a word with his colleagues at neocon National Review on this issue -- that would be the same open borders, money-grubbing, Bushcon-worshipping National Review snakes who railed secure-borders, America-first patriot Pat Buchanan out of the mainstream conservative movement years ago over this very issue and others just like it.

The neocon-Right is comprised of such pathologically greedy, stinkingly hypocritical, phony-baloney "pillars of society," they'd make the murderous, money-hungry, "upstanding" Pharisees of Jesus' era blush. No wonder National Review gets along so well with the pharisaical, Israel-first Judeofascist crowd.

Victor Davis Hanson, what a pompous-ass hypocrite you are; isn't it obvious that the Israel-first crowd, with which you are in bed, couldn't care less about what happens to America and is just exploiting it for its own ends? And then you have the chutzpah to whine when it gets turned into a third-world hell hole that's getting bled dry by other unpatriotic mooches? Who do you think lobbied for open borders and showed them how the scam is played in the first place? Pull your head out of your ass, you academic ignoramous. 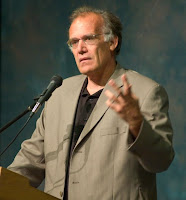