From:
Many Bailed-out Banks May Fail Anyway
(The New American) -- by Charles Scaliger --

As many as 98 banks, which took in a total of $4.2 billion from the Troubled Asset Relief Program (TARP), may fail anyway, according to a study of third quarter earnings by the Wall Street Journal. Although the federal government originally promised to use TARP funds only to help healthy banks, the Wall Street Journal’s study tells a rather different tale. The banks in question are hamstrung by “eroding capital levels, a pileup of bad loans and warnings from regulators,” much of them stemming from risky commercial real estate loans gone sour.

Also significant is that most of the banks on the list are small, averaging $439 million in assets. The Wall Street mega-banks are once again flush with cash — but then, many of those privileged institutions, numbered among the Federal Reserve’s “primary dealers” with whom open market operations are conducted, have had direct access to Federal Reserve funds via the Fed’s new Primary Dealer Credit Facility and Term Securities Lending Facility. Goldman-Sachs, for instance, a primary dealer that has made enormous profits during the financial crisis, had more than $75 billion by the end of the third quarter and has paid back all its government loans.

Already seven bailed-out banks have failed, at a cost to the taxpayer of $2.7 billion. But the real tale of the Great Bank Bailout has been the shameless financial favoritism lavished on the largest banks, in the United States and abroad, who are fortunate enough to be allowed to conduct business directly with the Federal Reserve. Those institutions are the first recipients of the massive amounts of new money the Fed pours into the money supply via the coyly named process of “qualitative easing.” Their balance sheets have ballooned well in advance of the inflationary rising prices that will hurt the rest of us once the money begins to circulate.

Thus it is, and has been since the inception of the Federal Reserve System, that the rich — the largest financial institutions and their direct benficiaries — continue to get richer, while the poor — the rest of us, including thousands of local banks nationwide — get poorer and poorer, both by having our taxpayers dollars siphoned away and by having our currency destroyed in order to keep the wealthiest banks afloat...LINK
------------------------- 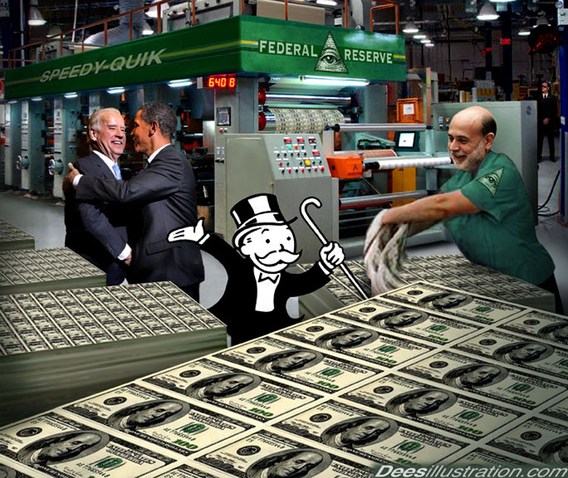 a mathematical analysis showing how the fed receives the TOTAL value of ALL T-securities OFF OF THE RECORD is posted at http://www.synapticsparks.info/dialog/index.php?topic=32.msg192