From:
Clinton would raise debt ceiling on own -- but not Obama
(USA TODAY) -- by David Jackson --

The president says he would lift the debt ceiling on his own, with or without congressional approval.

That president, however, is Bill Clinton.

In a recent interview with The National Memo, Clinton said he would raise the $14.3 trillion debt ceiling on his own if Congress fails to act, and "force the courts to stop me" rather than face a government default.

"I think the Constitution is clear and I think this idea that the Congress gets to vote twice on whether to pay for (expenditures) it has appropriated is crazy," Clinton said.

Clinton referred to the 14th amendment, a post-Civil War measure that reads in part: "The validity of the public debt of the United States, authorized by law, including debts incurred for payment of pensions and bounties for services in suppressing insurrection or rebellion, shall not be questioned." 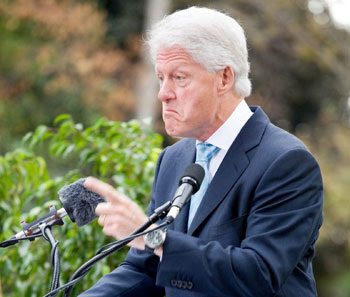