90% of stock market wealth owned by just 10% of Americans, yet self-serving kleptocrats in Congress vote billions in taxpayer funds to prop up Wall St

Should a Stock Market Decline Stop the Goldman Prosecutions?
(by Washington's Blog) --

From the San Francisco Chronicle: 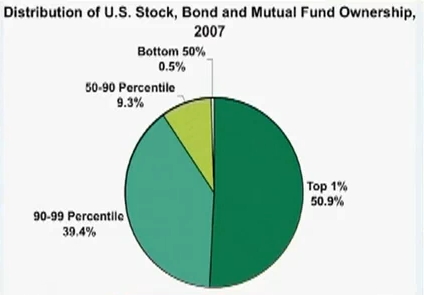 (Of course, the divergence between the wealthiest and the rest has only increased since 2007.)...

Many people say that keeping the stock exchange up is important to maintaining people's wealth. But since the bottom 50% of Americans don't have much skin in the game, and the giant prop desks are probably doing most of the trading, the stock market really doesn't affect most Americans very much.

After Hank Paulson initially asked for $700 billion to bail out the banks, Congress refused. Then the stock market tanked (and Paulson said there would be martial law unless TARP was approved), and Congress gave Paulson his bailout. They said they had to do it, because their constituents were being hurt by the stock market downturn.

As I pointed out last November, there are a lot of millionaires in Congress:

A report by University of California, Berkeley economics professor Emmanuel Saez concludes that income inequality in the United States is at an all-time high, surpassing even levels seen during the Great Depression.

The report shows that:

"In the economic expansion of 2002-2007, the top 1 percent captured two thirds of income growth."

On the other hand, billionaires have never had it better (and see this).

Of the 535 members of Congress, over 44% - 237 to be exact - are millionaires. Fifty have net worths of at least $10 million, and seven are worth more than $100 million. By comparison, around 1% of Americans are millionaires. There is no other minority group that is as overrepresented in Congress. See this.

Indeed, Herbert argues that the real reason that Congress approved the TARP bailouts is that their money was on the line. In other words, they had a lot of skin in the game, and so they voted to bail out their own assets. But they just pretended it was for the good of the American people.

Whether or not Herbert is right (Paulson did pull a bait-and-switch), the information discussed above makes for valuable background for looking at the Goldman prosecutions and the stock market.

Specifically, I'm already hearing Goldman defenders say, "See, when you go after Goldman, the market tanks! Back off, or it will hurt the American people!"

The economy can only be stabilized if the people who committed fraud are prosecuted.

Here's Wikipedia's definition of a Kleptocracy:

Kleptocracy, alternatively cleptocracy or kleptarchy, from Greek: κλέπτης (thieve) and κράτος (rule), is a term applied to a government that takes advantage of governmental corruption to extend the personal wealth and political power of government officials and the ruling class (collectively, kleptocrats), via the embezzlement of state funds at the expense of the wider population, sometimes without even the pretense of honest service. The term means "rule by thieves". Not an "official" form of government (such as democracy, republic, monarchy, theocracy) the term is a pejorative for governments perceived to have a particularly severe and systemic problem with the selfish misappropriation of public funds by those in power...

This would help explain, in part, why the kleptocrat Democrats, Bushcons and neocons have all united around the Wall Street bailout, the open borders agenda (to continue to prop up the corrupt system and mask their ponzi scheme with a wave of undereducated and easily dupable 2nd and 3rd worlders coming from even MORE corrupt societies, and keep the price of wages down for companies owned mostly by the kleptocrats) and Zionism (Jews and their spiritual collaborators comprise a hugely disproportianate number of the kleptocrats).

What he is really upset about, though, is that he sees the beginning of the end for the corrupt kleptocracy with the Arizona and Tea Party movements, as patriotic Americans are beginning to wake up and comprehend the massive swindle that has been taking place in this country for decades, who's behind it, and why.
Posted by Chris Moore at 11:48 AM