Berkshire crony capitalist says bail out the banksters and the ruling class and enslave the taxpayers, or you're a Nazi

Charles Munger, the billionaire vice chairman of Berkshire Hathaway Inc., defended the U.S. financial-company rescues of 2008 and told students that people in economic distress should “suck it in and cope.”

“You should thank God” for bank bailouts, Munger said in a discussion at the University of Michigan on Sept. 14, according to a video posted on the Internet. “Now, if you talk about bailouts for everybody else, there comes a place where if you just start bailing out all the individuals instead of telling them to adapt, the culture dies.”

Bank rescues allowed the U.S. to avoid what could have been an “awful” downturn and will help the country as it deals with the housing slump, Munger, 86, said. He used the example of post-World War I Germany to explain how the bailouts under Presidents George W. Bush and Barack Obama were “absolutely required to save your civilization.”

“Hit the economy with enough misery and enough disruption, destroy the currency, and God knows what happens,” Munger said. “So I think when you have troubles like that you shouldn’t be bitching about a little bailout. You should have been thinking it should have been bigger.”

Germany was unable to stabilize its financial system in the 1920s, and, Munger said, “We ended up with Adolf Hitler.”

Taxpayer funds injected into banks helped insulate bond investors from losses and cushioned stock declines for equity holders. U.S. programs designed to ease the burden for distressed mortgage holders didn’t prevent foreclosures from rising to a record. One out of every 381 households received a foreclosure filing in August, according to RealtyTrac Inc.

“Charlie Munger is misrepresenting history, and that’s why the public is angry at Wall Street,” said Joshua Rosner, an analyst at research firm Graham Fisher & Co. “We could have wiped out the equity holders before we wiped out the taxpayer.”

Berkshire had advanced 26 percent on the New York Stock Exchange this year as of Sept. 17 and benefited from a recovery in earnings at some of its main bank holdings. It is the largest shareholder of Wells Fargo & Co., the biggest U.S. home lender, with a stake valued at more than $8 billion. Berkshire also owns $5 billion of Goldman Sachs Group Inc. preferred stock...MORE...LINK
-------------------------

Munger says its okay to bailout the incompetent, billionaire bankers who have plundered the economy, but “if you talk about bailouts for everybody else, there comes a place where if you just start bailing out all the individuals instead of telling them to adapt, the culture dies.”

This epitomizes the mindset of the entire Ruling Class and Crony Class: Give us all the taxpayer money we can possibly consume, but don’t throw a dime to the peons. We wouldn’t want them to adopt our own sense of entitlement. It would be bad for our long term pocket book. 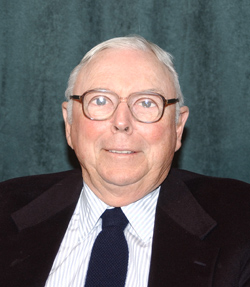 FUDDY-DUDDY, MONEY-WORSHIPPING DEGENERATE CHARLES MUNGER ADVOCATES TAXPAYER ENSLAVEMENT TO BENEFIT HIMSELF AND HIS BANKSTER CRONIES; TIME FOR THE NURSING HOME, THE FUNNY FARM -- OR THE JAIL CELL?
Posted by Chris Moore at 10:14 AM

The elite have to protect the big banks since the elites wealth and power come from their special access to borrowing from the big banks. Most of them are actually not that wealthy but they have leveraged their wealth using cheap borrowing to create their dominating position in the country and the world. We don’t have a elite built on wealth but instead a elite built on debt, a debt that needs constant refinancing to keep afloat.

When they claimed that the world economic system would collapse because of the failure of the big banks it was their own wealth they were worrying about. Without a constant stream of borrowed money coming in they the could not refinance their wealth and their overleveraged wealth would collapse.