From:
Monstrous Mao
(The New American) -- by Bruce Walker --

Frank Dikotter, an historian from Hong Kong, has been allowed wide access to Chinese Communist Party archives. Speaking at the Independent Literary Festival, Dikotter described Mao Zedong as the greatest mass murderer in human history. According to the historian, the entire death toll from the Second World War was 55 million people. Mao alone was responsible for the death of a mind-numbing 55 million in the years after the war.

Dikotter called this mass murder “like Pol Pot’s genocide multiplied 20 times over.” About the horrific nature of Mao himself and his hideous regime, there can be little doubt. Indeed, there is almost nothing good about Mao Zedong.

According to establishment historians, Mao fought the Japanese alongside Chiang Kai-shek and his Party of the People (invariably called in America by the more sinister sounding “Kuomintang”). Actually, Chiang and the Chinese Republic did nearly all the fighting. Chiang, whose personal rectitude was not even questioned by his fiercest enemies, was demonized by communists in America and presented as hopelessly corrupt. Yet Chiang could have reached an accord with Japan, as Gandhi appeared eager to do if the Japanese reached India, if he were as bad as he was portrayed to be. Then victory in the Pacific would have been very difficult for America and the Western allies.

Chiang also, notably, recognized the autonomy and practical independence of Tibet when governing China. The beginning of that ghastly genocide in Tibet, so sanctimoniously protested by Hollywood types, began in 1949, the year Mao came to power in China.

Anti-communists in America during the early 1960s tried every way possible to let the world know about the horrors being perpetrated on the Tibetan people by Chinese Communists under Mao. No one listened. Instead, the New Left and other organs of subversions lionized Mao (much like they lionized the sadistic tyrant Castro.) Even by the time of his death, the hypnotized people of the free world viewed the “Great Helmsman” as a liberating figure in Chinese history.

Anyone who had been honestly watching China, though, could tell what Hell the “People’s Republic” had become. Millions risked death and worse to cross the Bamboo Curtain into Hong Kong or Macao. They carried stories with them to rival the unhappy creatures of Hitler’s or Stalin’s dreadful camps. The Great Leap Forward, anyone interested would have known long before Mao’s death, was a dreadful collapse backwards. The term “Death by Government” was, perhaps, never more true than with Mao.

Also obvious to anyone who cared about the truth was that the Republic of China on Taiwan was moving rapidly into a relatively prosperous and free society. No Bamboo Curtain kept people from leaving Taiwan. Hong Kong, another Chinese polity, had a thriving economy based upon economic liberty, and a lively public life. Singapore, a more regimented Chinese island-nation to the south, nevertheless had a large measure of freedom both personal and economic, a fast growing economy, and a peaceful, neutral nation. Clearly — again, to those who cared about truth — the Chinese people had a cultural and social heritage that encouraged diligence, thrift, honesty, family, and education. Three Chinese polities thrived and blossomed, but one — Mao’s China — dipped into a dark age.

The inhumanity of Mao, his godless brutality to everyone around him, the dreary banality of his mind (as evidence by his infantile and fanatically celebrated "Little Red Book") should have made him, long ago, an object lesson in how very wrong communism and its sibling totalitarianisms can be. The greater question, perhaps, is why anyone would be surprised that Mao was as evil as Hitler or Stalin. His regime, in which parents were publicly forced to murder their own children in horrific ways like burying them alive or dousing them with flammable fluids and burning them alive, is news to the world — but not those who viewed the world without the colored lenses of wishful socialism...MORE...LINK
------------------------- 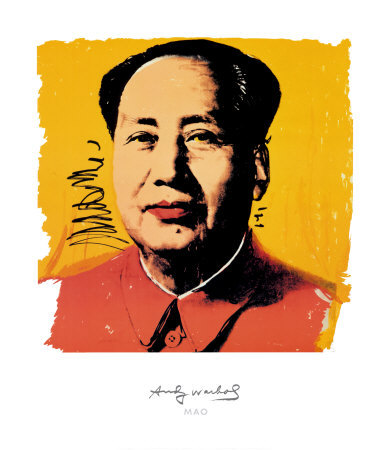 Sadistic psychopath Mao (as celebrated by liberal bon vivant Andy Warhol) and his left-wing minions forced parents to murder their own children by burning or burying them alive, all in the name of "equality"