Ron Paul is taking on Rick Perry in a new television ad blasting the Texas governor for for supporting Al Gore’s 1988 presidential campaign, POLITICO has learned.

The 60-second spot, backed by a six-figure ad buy — the first negative ad attacking Perry to come directly out of a Republican campaign this primary season — contrasts Paul’s endorsement of Ronald Reagan in 1980 with Perry’s role as the Texas chairman for Gore’s first presidential campaign.

“The establishment called him extreme and unelectable, they said he was the wrong man for the job. It’s why a young Texan named Ron Paul was one of only four congressmen to endorse Ronald Reagan’s campaign for president, believing in Reagan’s message of smaller government and lower taxes,” the ad says. “After Reagan, Senator Al Gore ran for president, pledging to raise taxes and increase spending, pushing his liberal values. And Al Gore found a cheerleader in Texas named Rick Perry. Rick Perry helped lead Al Gore’s campaign to undo the Reagan revolution, fighting to elect Al Gore President of the United States.”... 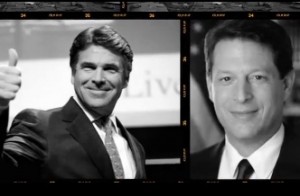 Don't hate us because we're beautiful: Rick Perry and Al Gore both get thumbs up from the Washington establishment